Henry Edenborough, fifth child of Samuel & Sarah Edenborough (née BOLTON) was born on 14 May 1812 at Bruce Grove, Tottenham, Middlesex. At the age of 15 he was employed by the Honourable East India Company in the Mercantile Marine Branch as a midshipman, per Lord Lowther (1827-28), and Abercrombie Robinson (1829-30).

By late 1833, Henry had left the employ of the HEIC and had made at least one voyage to Sydney as captain of the schooner Emma. Then in 1834, he took up the position of master of a newly-built 380-ton barque part-owned by his father Samuel. This first voyage, as the newly installed master of the Augusta Jessie, was to Tasmania, arriving 22 Jan 1835 with a cargo of 210 male convicts.

Several more voyages to Australia followed before Henry married Margaret Stedman in London in 1836. They eventually travelled to Australia, on board the Elphinstone in 1840, to take up residence at Wollogorang in the Goulburn district of New South Wales. It is believed that the impressive homestead that still stands today was built by Henry in 1846.

The first of Henry and Margaret’s six children, Henry Bolton, was baptised in Sydney shortly after his parents arrival in the colony in 1840; the remaining five children though – Charles Allen (1842), Bishop Reynold (1843), Margaret Annie (1845), Edith Jane (1846) and Spencer Neville(1848) – were all born at Wollogorang.  The 1841 census of New South Wales shows that Wollogorang supported four ticket-of-leave men, five shepherds, eight gardeners and stockmen, and four domestic servants. 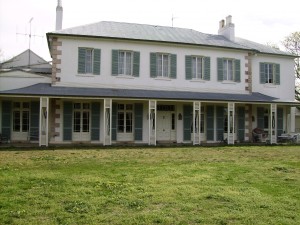 Wollogorang Homestead as it appeared in 2008

As if running a large sheep and cattle station wasn’t enough, Henry also involved himself in the local community; gave an acre of land for an Anglican church as well as a further acre for a cemetery and became a Justice of the Peace before being appointed a Magistrate of the Territory in 1844.

Henry is often quoted as being a colourful figure who owned a racehorse. But this statement is incorrect. It was, in fact, Henry’s younger brother, Horatio, who spent some time in New South Wales and who was the racehorse owner.

The Goulburn Herald of 17 Jan 1849 stated that Governor Fitzroy, Deas Thompson (the Colonial Secretary) and party “partook of luncheon” at Wollogorang and “were much gratified at the off-handed and unpretending hospitality of Mr Edenborough, for which the gentlemen of the district know him to be so remarkable”.

In 1854, Henry sold Wollogorang and all stock to his neighbour, J W Chisholm, and with his entire family returned to England arriving there at the end of 1854.  Henry died at Chesham Lodge, Surrey, on 6 Feb 1855, aged 43 years. Margaret survived her husband by 14 years dying at Sheffield Gardens, Kensington on 26 Oct 1869.

In 1992, Henry was honoured for his participation in the development of Australia by having his name affixed to a plaque located near the Overseas Shipping Terminal on Sydney Harbour.