Morning tour – picked up by bus.

Drove past Houses of Parliament – Tomb of Unknown Soldier (2 ceremonial guards) to the Acropolis (highest hill in a city), Propylaea (entrance building) and Temple of Wingless Victory.

Soldiers on guard outside Parliament House

View from the Acropolis

Tourist buses parked at the Acropolis

[Travelled] on to the Parthenon. The size of the Parthenon is staggering. Some restoration work going on. Marble brought from the hills some distance away. 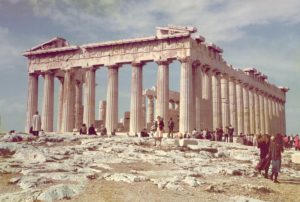 Elsie (centre, front) at the Parthenon 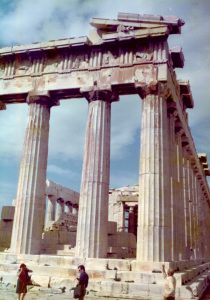 Afternoon walked to Flea Market area. A maze of small lanes, small shops stacked with all types of goods. One fellow had a downstairs shop. He had been in Victoria 20 years – married a girl from Albury [New South Wales]. Came back here to live 18 months ago. His father wanted him to come back to run his business. He said wages very low and conditions not so good. No place like Australia. He was a true salesman. Elsie bought a blouse.

Visited a Greek Orthodox Church just before 6 pm and service started. Elsie told she was not permitted to sit with her knees crossed.