Wednesday began with the Innovator Summit General Session. The keynote speaker was Liz Wiseman, president of The Wiseman Group that teaches leadership to executives and emerging leaders around the world as well as workshops and development programs. Liz Wiseman is also a bestselling author of three books and contributor to Harvard Business Review, Fortune and Wall Street Journal. Liz was someone I had never heard of before, being from outside the USA, but WOW what a motivational speaker! She wasn’t a feminist pushing her success down your throat and she also wasn’t a corporate bully telling you what you have to do to succeed.  But what she spoke about was amazing, including, that not everyone is a genius but everyone has genius and how we can evolve it. I was so totally impressed with her business and life standards that I chose to forgo my next genie session to sit in on her one-on-one interviews. And, therein, I had my own 5 minutes of fame when I was able to explain why smoke detector batteries always begin to chirp at night when the batteries are getting flat. As soon as I arrived home I purchased her best-selling book, Rookie Smarts. 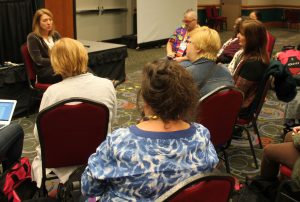 There was no way, however, that I would forego my next session. It was time for the exciting Innovator Showdown Semi-Final. I wrote previously of the ten semi-finalists that had been whittled down from an initial 42 entries so I won’t repeat myself here with that detail. For now, the Innovator Showdown Semi-Final required each of those ten finalists to promote their software innovation in a 2-minute pitch in front of a 5-man judging panel.  As each innovator took the stage it was easy to see that all were worthy of a place in the final.

However, only five finalists would proceed to the Innovator Showdown Final to be held on the Friday of the conference. No doubt the ten finalists spent an anxious afternoon waiting for the official announcement to be made that evening, during the RootsTech Welcome Party, of who would be the five finalists.

In the afternoon I attended a booked Lab session on Palaeography. Even though I am already fairly skilled with palaeography, I still managed to come away with one or two new ideas and thoroughly enjoyed myself. I felt the standard of this Lab session was very good but speaking later with many advanced genealogists attending RootsTech it appears not all Lab sessions were as good – especially for those who had booked sessions expecting advanced teaching but receiving only basic education. 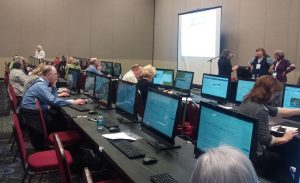 The evening entertainment event was the 80s-themed Welcome Party held at the Marriott Ballroom opposite the Salt Palace Convention Centre. The entry to this function certainly didn’t go as smoothly as planned but putting that aside it was a great evening to unwind among friends. Jason Hewlett did another fabulous job as MC, thrilling us with his Michael Jackson impersonations among many others. Lots of small prizes were also given out for all manner of competitions including dance and karaoke. 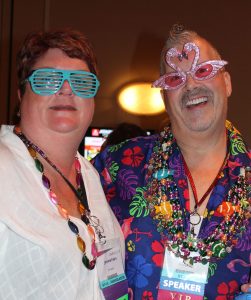 However, the moment we were all waiting for –  the announcement of the five finalists for Friday’s Innovator Showdown. And the winners were:  Emberall (Capture, organize, store and share the life history of a loved one – from your smartphone in as little as 30 minutes); Kindex (Accessible, searchable archives for everyone through collaborative record sharing and indexing);  Double Match Triangulator (An autosomal DNA analysis tool for genealogists); OldNewsUSA (The easiest way to find your family in historic newspapers – on your phone); and QromaTag (Add your story to any photo using your iPhone and your voice). Congratulations to all who participated. 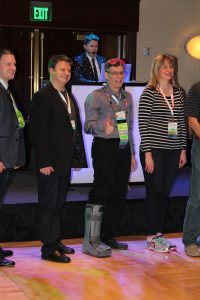