The second day of RootsTech began with a very early start for the official Ambassadors – a behind-the-scenes tour of the Expo Hall at 7.30am! The Expo Hall was huge and to be given the opportunity to wander around to view and take photographs of exhibitor stalls without a massive crowd was a terrific opportunity. 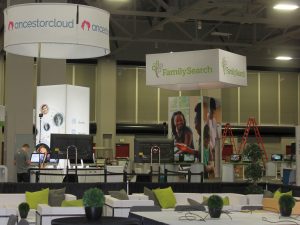 The Hall was divided into three main areas: Innovation Alley for showcasing new tech tools and products; the Discovery Zone – full of interactive displays and activities while you learn about your heritage; and the Demo Theatre – a place to sit and relax while watching exhibitor presentations and demonstrations.

A fraction of the comfortable seating available for the Demo Theatre

Two new highlights for 2017 were the addition of a Coaches’ Corner, where you could drop in for some one-on-one mentoring from an expert genealogist, and the Heirloom Show and Tell – a place to bring your antique, heirloom, or photo to, for an expert to look at.

Following our tour of the Expo Hall we were seated for the Keynote session which began with Steve Rockwood, CEO of FamilySearch, talking about his family and the importance of food traditions within his family. He then went on to launch  a campaign whereby individuals can preserve and share family recipe stories at FamilySearch.

Steve was followed by the exciting Property Brothers – Drew and Jonathan Scott. While I had never heard of these two before RootsTech, there were definitely several Ambassadors around me who went weak at the knees when they bounded onto the stage. And the Scott brothers didn’t disappoint. They were fast and full of energy as they told us hilarious stories of their home life and family holidays as well as why Jonathan learned to play the bagpipes. 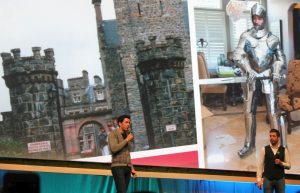 The first lecture I attended was on Wolfram Alpha for Genealogists and was presented by the renowned and highly entertaining Thomas MacEntee. He brings a presentation to life and thoroughly enjoys doing what he does best – helping others. Listening to the many merits of using Wolfram Alpha has certainly opened my eyes to new ways of researching the lives of our ancestors. 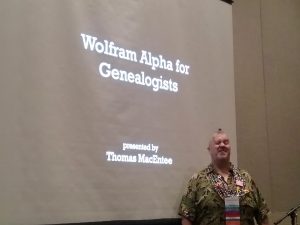 In the afternoon I attended my other lecture for the day – that of Researching Your European Ancestors Online by the IntoThePast team.

The evening’s entertainment was performed by the Mormon Tabernacle Choir and guest soloist Dallyn Vail Bayles. Unfortunately, I was a last minute cancellation having received some worrying news from home but everyone I spoke with, who had attended, advised it was a huge success. Entitled Music – It Runs in the Family, it was held at the LDS Conference Centre on North Temple Street and was a mixture of music and stories of the Rodgers & Hammerstein legacy.