Visited Stirling Castle. All the Scottish monarchs have been crowned here. In very good order much restoration work going on. Castle overlooks the whole Forth Valley and used to control all movement to the north. Great Hall used as military barracks for over 300 years by the Argyle and Sunderland units. All interior additions are being taken out and the place restored. The original type windows being done in stone. Baptism Hall, Banquet Hall now museum for the silver of the Scottish units. Large silver centre piece to commemorate the Scots in the South African war and other places they have served. The Royal apartments and some of the circular wooden carvings – known as the Stirling Heads that used to decorate the ceilings.

Out to Callander. Lunch overlooking a small river. Browsed through the shops looking for bargain sweaters. 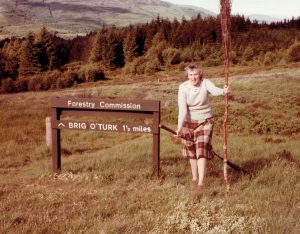 Elsie and the fire brooms

View near the Trossachs

Out to the Trossachs – large rugged mountains that overlook Loch Venacher and up to Loch Katrine – the dam for Edinburgh’s water supply. Lookout on hill top overlooking the Trossachs. Photo of Elsie and the fire-brooms.

Mrs Stirling talked on so we had a late night before our usual supper. 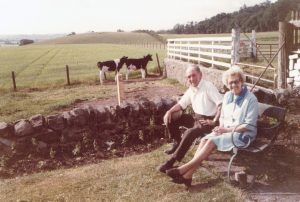 The farm at Stirling