As another Christmas arrives far too quickly, it is interesting to look back on Christmas’ past and recall the fond memories of my childhood: of my sister, brother and I tearing from our beds to see what Santa had brought, wildly unwrapping our goodies, and, racing next door to our neighbours to compare presents with their four children. Between them and us there would be seven kids riding up and down in front of our houses on an assortment of new bikes, scooters and skateboards – and all before 8am!

Then, of course, there was lunch … 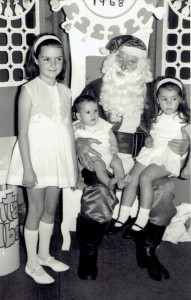 As a child growing up in the 1960s, the cold seafood buffets and barbecued lunches we enjoy today in Australia weren’t even a figment of our imagination back then. Instead, we sat through a variation of the typical English Christmas dinner of a roast and baked vegetables. I say a variation because my stepfather was Italian and this meant that we sat through a MASSIVE Christmas lunch. If it was only our immediate family for lunch it would start with either, soup, or pasta, followed by roast lamb AND chicken with the usual baked vegetables, including at least two types of beans, as well as peas or zucchini. Dessert, if we wanted it, was usually Neapolitan ice-cream.

But if we were having Christmas lunch at Aunty Giovanna’s, or another of my stepfather’s siblings’ homes, there was ALWAYS antipasti first, followed by pasta which would either be lasagne or cannelloni, then the roasts – often veal and chicken (and more often than not, a fish dish too) and a ton of cooked vegies. Eventually, dessert would appear hours after sitting down to eat. I have to admit I don’t really remember the desserts – as kids, my sister, brother and I were always too full to eat our dessert – but I do remember there were always ricotta cannolis, pistachio cakes and Amaretti biscuits to take home.

Needless to say, there wasn’t much running around done in the afternoons/evenings after one of these feasts. In fact, looking back, I expect mum and dad really needed the quiet time to rest up following what must have been only a couple of hours sleep the night before. On Christmas Eve, we always attended Midnight Mass at a small Catholic church located at the end of our street. Following church it must have been a nightmare trying to get us kids to sleep so that they could put out the presents and catch a few zzzz’s before the three of us ran amok with Christmas present excitement.