With genealogy, there are two attributes you need more than anything else … patience and persistence!

Searching one’s family tree is nowhere near as easy as the Who Do You Think You Are? TV series and the many Ancestry.com advertisements depict. Instead, it is only through patience and persistence that you eventually break down the brick walls of your research. And these two attributes are even more important if you are researching Irish ancestors.

As early as 1992 (when I undertook my first trip to Ireland), I knew that the Casey line originated in Cork, Ireland. What I wasn’t able to ascertain was whether it was the city of Cork – or the county of Cork – until my fourth visit there in 2013.

Daniel Casey arrived in Sydney, Australia, in the 1880s per the steamship Potosi. He had paid for his passage in steerage (third class) which meant that, unlike government assistant immigrants, there is no information recorded on the passenger list regarding his birthplace or parentage.

After welcoming their only child in 1888, Daniel succumbed to tuberculosis and died on 22 September 1891 at Liverpool Asylum. Asylums were the precursor to today’s hospitals as we know them, and were used for many years to care for destitute and infirm persons. 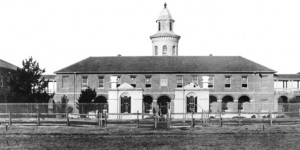 The Register of Inmates for Liverpool Asylum stated that Daniel Casey was:

[aged] 30 years; a Roman Catholic; born in Bradford; came out 8 years ago on SS Potosi
as a passenger; married with one child; a cook last employed by the Sydney Catering Co.
3 months ago; been living at 277 Liverpool St; suffered from Phthisis [tuberculosis]; had a brother, J Casey (address unknown) living in Australia; and died 22 September 1891.2

Further information gleaned from the hospital register stated he was married with no property, had been in the Sydney Infirmary 22 days prior to admission at Liverpool Asylum, and had worked for the Sydney Catering Co. for 12 months. 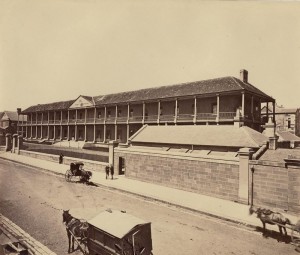 Sydney Infirmary, 1870  [attributed to Charles Pickering] the image is from the collections of the State Library of NSW SPF / 176

Tracing backwards, Daniel was born 20 March 1859 at 2 Craven Street, Bradford, Yorkshire – the second son, and fifth of seven children, born to Daniel and Maria Casey (nee Dempsey). His father, Daniel Casey Snr, was recorded on his son’s birth certificate as being a power loom/worsted weaver.3

The first English census held following Daniel’s birth was that for 1861 and the two-year-old Daniel was easily found living with his family at 2 Craven Street. Also enumerated on the census schedule was an elder, married, brother of Daniel Snr named Joseph. This census schedule recorded the first evidence that the Casey family originated in Cork, Ireland.4

Ten years later, the 12-year-old Daniel Casey was recorded in the 1871 census as working as a worsted spinner along with several of his siblings.5 The place of birth recorded for the elder Daniel was only listed as Ireland, so a definitive place of origin in Ireland was still not known.

By the 1881 census Daniel Casey was no longer living at home; his father had died, and his widowed mother was recorded as being head of the household.6 Maria Casey recorded her place of birth as simply, Ireland.

Daniel was eventually found in the 1881 census, at Weymouth in Dorset where he was recorded as being a private with the 1-14th Regiment.7 At some stage, Daniel had obviously decided that a life in the army had to be better than that of a worsted mill worker. More research needs to be done on Daniel’s life in the army, but for his stay at Weymouth we can assume he was housed at the Red Barracks. And perhaps it was from his military life that Daniel learned the occupation of pastry chef.