James Dempsey made his first land purchase in New South Wales, at Balmain, from John and Eliza Nicholson on 7 September 1843 for the sum of £45.1 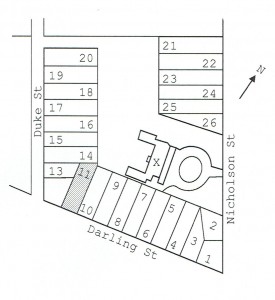 Dr William Balmain, the Principal Surgeon of the Colony, had been granted 550 acres by Governor Hunter in 1800. The following year the grant, in its entirety, was transferred to Dr John Gilchrist of Calcutta, India. Gilchrist, having bestowed power of attorney to his Sydney agent, Frederick Parbury, eventually had Parbury subdivide the 550 acres into 22 lots in 1833 and between 1836 and 1840 he successfully put the Balmain Estate up for auction.

John Nicholson, who had served a distinguished career in the Royal Navy, and was employed in the Colony by the Crown as Master Attendant and Harbour Master, purchased Lots 15 and 18 of the Balmain Estate in 1836. This gave Nicholson eight acres of waterfront land where he built his residence Durham House.

However, due to a severe economic depression throughout the Colony in the early 1840s, Nicholson was forced, in 1842, to sell off part of the grounds of Durham House in an attempt to stave off his creditors.

Nicholson chose to subdivide the grounds into 26 Lots of land facing Nicholson, Darling and Duke Streets, reserving a wide frontage to Nicholson Street which allowed his home to retain its harbour views and not reduce the value of the house.

This was happening at a time when the Colony was emerging as a free society – distancing itself from its convict origins. Labourers, skilled and unskilled, could now move around freely and, against this backdrop, the population of Balmain was to increase rapidly.

Before 1840, only a few families of well-to-do businessmen had lived in stately homes in Balmain. With the sub-division of Nicholson’s land, the new Balmain residents covered a mixed variety of occupations such as butchers, grocers, blacksmiths, shoemakers. Its location on the harbour would also see Balmain receive an influx of nautical and associated industry tradesmen.

Within a year of having purchased Lot 11 of Nicholson’s subdivision, (75-77 Darling St, Balmain), James Dempsey (I) had his son James (II) build a weatherboard cottage and butcher’s shop on the land in 1844.3 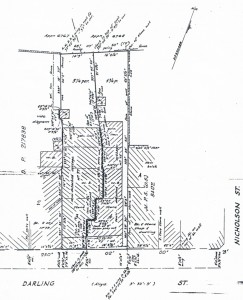 On 23 January 1857, James Dempsey (I) also purchased land in Rose Street, Darlington, (Lot 17 of Block 5 of the Darling-Nursery Estate), from Benjamin Morris for the sum of £130.4 James, and his wife Jane, then made this property their permanent residence. The Rose Street premises contained a brick two-storey semi-detached dwelling known as No.’s 88 and 90 Rose Street. 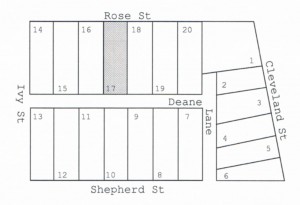 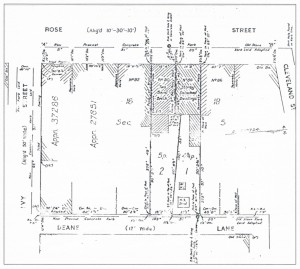 The Darling-Nursery Estate had originally been land granted to Thomas Shepherd for use as a nursery and was named in honour of Governor Darling. Although Shepherd’s nursery was a pleasant spot its impact on the area was limited as Shepherd catered not for the poor citizens but for the gardens of the wealthy.

The other large landholder in the immediate district was Robert Cooper who owned the Brisbane Distillery which was taken over by the Colonial Sugar Refining Company in 1855.

The earliest Darlington Valuation and Rate Books date from 1866 and they show that in 1866 James Dempsey was owner/occupier of both semis. The Rate Book for 1867-68, however, shows that James had decided to occupy only one of the buildings and was renting out the other.

The tenant, John Hawthorn, stayed until 1870 when a fellow named John Fewings then took over the rental. Fewings rented the premises until 1878 after which time the premises saw a succession of tenants on a yearly basis.

In 1862, five years after purchasing the Rose Street premises, James, who by now was recording his profession as a landholder, also purchased land in Fotheringham Street, Newtown, for the sum of £45.5 He sold this block 11 years later to his son-in-law Charles Cooper for £150.6 One year after purchasing the Fotheringham Street property, James sold his premises at Balmain to butcher James Conway for £350.7

Following the death of his wife Jane in 1870, James Dempsey (I) did not continue to live at Rose Street, moving instead to 1 Laura Street, Newtown, the residence of his daughter Catherine and son-in-law Matthew Medway. The premises at Rose Street, though, weren’t sold until after James’ death in 1888, allowing James to live off the rents earned from them. 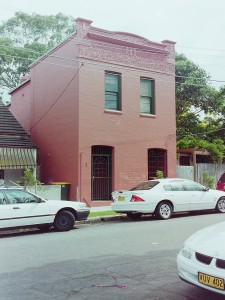 This photo taken in 2011 of 1 Laura Street,
Newtown, is presumed to be the home of
Catherine and Matthew Medway in which
James Dempsey lived out his later years

At the time of Jane’s death, Rose Street could be classified as a fairly well-to-do address compared with many other streets In the area that were falling into a state of disrepair. Of the 49 dwellings recorded in the Assessment Book for Rose Street in 1870, 34 were built of brick and four of stone with only 11 dwellings being built of timber. The street also contained three parcels of vacant land.

James Curry moved into his grandfather’s home in 1873 and remained there until 1878 when the two semis were then rented out on a yearly basis.

It is interesting to note that in October 1870, five months after Jane’s death, the residents of Darlington, along with the residents of Glebe and Chippendale, signed a petition praying for relief from the Colonial Sugar Refining Company’s practice of storing and burning hundreds of tons of bones in every stage of decomposition. The company’s practice of burning the bones was to create charcoal for filtering purposes. The residents complained that:

The effluence, gas and smoke generated by the storing and burning of the said bones are in the highest degree prejudicial to health, obnoxious and offensive in the extreme and detrimental to the social advancement of the district.8

Although James Dempsey’s name was not among the residents, his tenant, John Fewings, signed the petition which shows that James’ premises must have been affected by this revolting practice.

While residing at Medway’s home, James Dempsey made out his will on 28 December 1887. He appointed a friend, John Humphries of Darlington, and a grandson, Henry Robinson, as trustees and executors to the will.

As per the terms of his will, any of his estate which did not consist of money was sold and converted to cash and after any debts, funeral and testamentary expenses were covered the remainder was divided as follows:

The trustees were to retain 10 pound each for their trouble, son-in-law Charles Cooper to receive 100 pounds (50 of which had been lent to James), 5 pounds each to the five surviving children of grandson James Curry as a memorial to their deceased sister Lilian; and 25 pounds to be paid to Mrs Annie Duffy of Albion St, Sydney. The remainder of the estate was to be equally divided between James’ three surviving daughters – Catherine Medway, Annie Porteous and Rose Cooper. Catherine though was to receive an extra 100 pounds having been money lent by her to her father.

Following James’ death in 1888, John Humphries and Henry Robinson dutifully carried out the terms of James Dempsey’s will and put the Rose Street premises up for public auction on 12 December 1888. William Jones, proprietor of the Town Hall Coffee Palace in George Street, Sydney, being the highest bidder, was declared the purchaser at a sum of £650 and finalised the transaction on 17 December 1888.9

At the time of the sale, the property consisted of a block of land having a 30ft frontage to Rose Street with a depth of 100ft to a lane at the rear, upon which were erected two houses built of brick with slate roofs each containing five rooms and wash-house.10 Today, the area which housed the Rose Street property is used by the Engineering faculties of the University of Sydney.